Rosemary and Sage Roasted Turkey (+ How to Make Homemade Gravy)

How to Separate Egg Whites from Egg Yolks (Easy Enough for Kids to Do!)

9 Infused Water Recipes You + Your Kids Will Actually Drink

The Secret Ingredient To Make Any Salad Super Flavorful 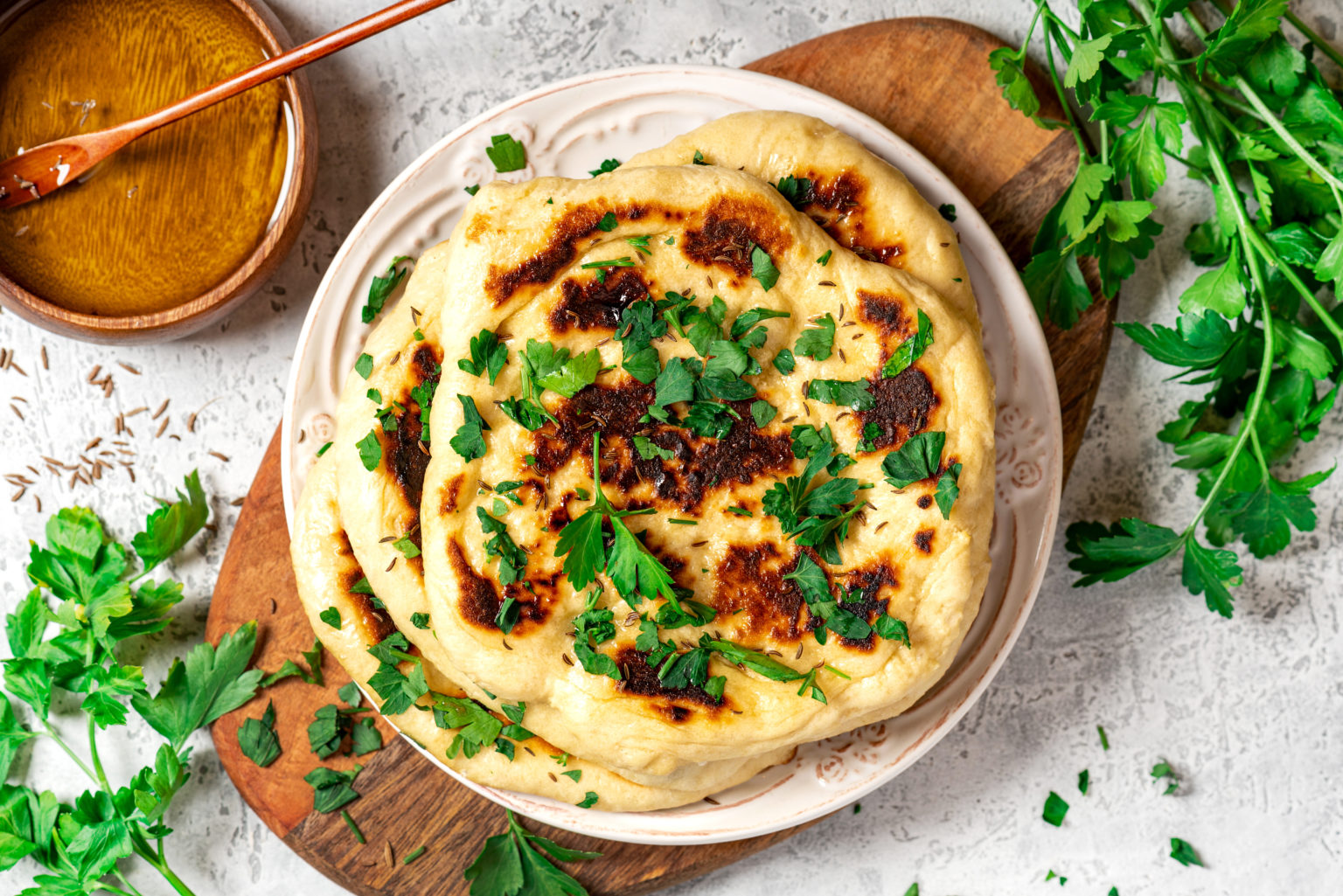 Whole-wheat naan is a soft, flavorful flatbread that’s perfect for scooping up your favorite dip, curry, or masala dish (no spoon necessary).

It also works as a great pizza base, can be used as a wrap or served alongside of soup.

Whether it’s sandwich bread, flatbread or cornbread, we love pairing our meals with a small slice. Unfortunately, most store-bought and restaurant flatbread is made with enriched white flour and some not-so-great oils, which is why we wanted to create a real food version that still tasted yummy.

While bread may seem difficult to make, it’s really quite simple. The trick to a soft, delicious bread starts with an active yeast, followed by just enough flour to produce a stretchy, workable dough and finally, some kneading. Just like making homemade tortillas, the process gets easier with every attempt. If you have time to make a big batch (it’s worth it!) then you can freeze some for later.

This sweet and buttery naan is made with simple, FfL-friendly, real food ingredients and is something your entire family will love!

Traditionally, naan are cooked in a clay tandoor oven with a charcoal or wood fire. The cylindrical oven is heated to around 900 degrees. The dough is slapped on to the side of the oven, where it sticks, quickly bubbles up and cooks through in the high heat. In a modern-day kitchen it isn’t really possible to recreate a tandoor oven, but a hot cast iron skillet on the stove top does a similar job. This recipe yields a delicious, soft flatbread with beautiful golden brown spots on the surface.

What is the difference between naan and pita bread?

Both naan and pita bread are known as flatbreads. The biggest difference between the two is that naan is traditionally made with egg and yogurt that thickens the bread and gives it a slightly softer texture when cooking it. Pita bread is a bit drier. This naan recipe uses whole wheat flour (which is slightly denser than white flour), egg and yogurt.

Storing your flour: Store fresh flour in the refrigerator or freezer so it doesn’t go rancid.

Warm water: Make sure your water is lukewarm (about 100 degrees), not hot. Hot water can actually kill the yeast.

Mixing your dough by hand: If you don’t have a stand mixer, you can use a bowl and knead the dough with lightly floured hands or a large (strong) wooden spoon. This takes about 10 minutes.

Cooking temperature: Do the “sizzle test.” Flatbread tastes best (similar to tortillas) when cooked on a cast iron skillet or pan at an extremely high temperature, for the shortest time possible. Heat the skillet on medium-high heat. Do the “sizzle test” to know when your skillet’s ready by running your fingers under some water and flicking a few water droplets on the skillet. When you hear a slight sizzle, the skillet is warm enough to add the dough.

If your dough seems too sticky after rising to work with: Skip rolling it out on a floured surface (this is likely due to too much water/not enough flour). Instead, wet your hands and grab a small amount of dough (about 1/8th of the dough) and quickly slap it down on the hot cast iron skillet. Use the back of a large, WET spoon or spatula to QUICKLY press the dough flat (so it’s about 1/3-inch thick). Cook as specified above. Baking any type of bread is easy to do, but takes some time to master. Don’t get frustrated. Your naan may not look quite as pretty but it will taste just as good!

Don’t flip them too soon. After placing your dough on the skillet, wait until the dough begins to bubble on top and the bottom turns a light golden brown color, then flip.

Baking your naan in the oven, rather than on the stovetop: You can bake your naan in the oven, but it may slightly alter the texture/flavor. To do this, preheat your oven to the highest temperature possible (our oven caps at 550 degrees). Place a baking stone, cast iron skillet or baking sheet in the oven on the middle rack. Once dough is prepared and stone, skillet or pan is HOT, quickly slap your dough onto the surface and bake for 3-5 minutes, until you notice naan has started to puff up and brown.

Storage: Avoid leaving your naan sitting out, exposed to air. To store naan, wrap them in a kitchen towel or paper towels (to prevent them from drying out) and store in an airtight container or large Ziploc bag. Fresh naan will last for 1 to 2 days at room temperature. You can refrigerate it for 2 to 3 days.

The best way to reheat your naan: Lightly spray naan with water and reheat at 350 degrees until warm, about 2-4 minutes.

Freezing leftover naan: Because this naan freezes extremely well and it doesn’t take much more time, we often make a triple batch so we have leftovers for future meals. Allow naan to cool completely before freezing in a large freezer bag or an airtight container. To reheat, wrap individual pieces of frozen naan in foil and bake at 350 degrees for 5 minutes, or until warm. Frozen naan will stay good in the freezer for up to 3 months.

Some amazingly delicious ways to use your naan: 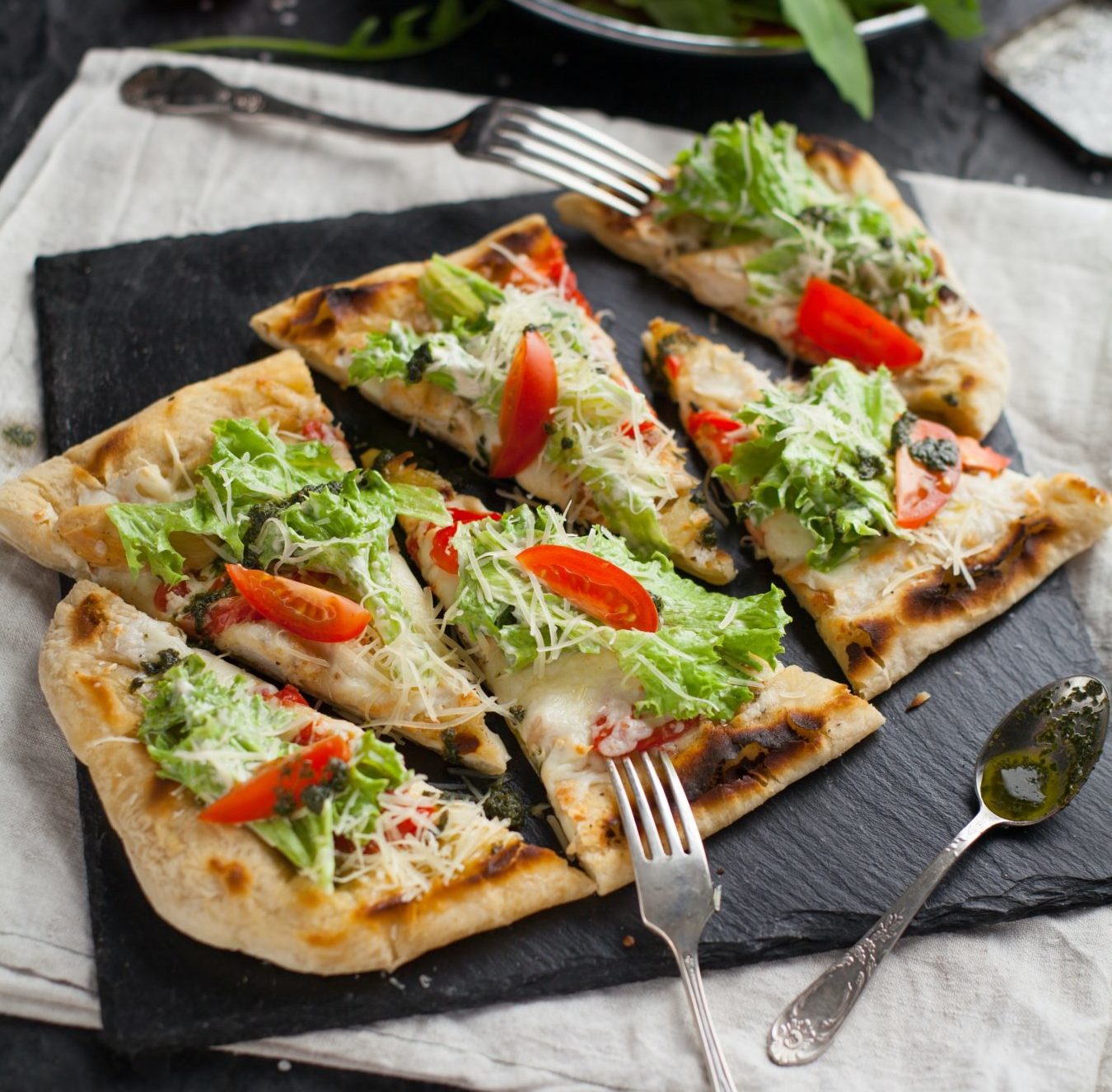 This easy Whole-Wheat Naan recipe uses simple ingredients and is finished with a garlic cilantro butter. It tastes better than the restaurants and can be served with your favorite dinner, such as curry or Tikka Masala, or as something to snack on.

If your dough seems too sticky after rising to work with: Skip rolling it out on a floured surface (this is likely due to too much water/not enough flour). Instead, wet your hands and grab a small amount of dough (about 1/8th of the dough) and quickly slap it down on the hot cast iron skillet. Use the back of a large, WET spoon or spatula to QUICKLY press the dough flat (so it’s about 1/3-inch thick). Cook as specified above. Baking any type of bread is easy to do, but takes some time to master. Don’t get frustrated. Your naan may not look quite as pretty but it will taste just as good!

We recommend organic ingredients when feasible.

Variations (we have not tried these ourselves):

Diary-free: Omit the yogurt and butter. Instead, try coconut yogurt and coconut or olive oil.

Egg-free: Omit the egg and slightly increase the amount of yogurt.

Picky eaters: If you or your family is new to the flavor of whole grains, use half bread flour and half whole-wheat flour. As your taste buds adjust, modify the ratios to favor whole-grain flour.

If you made this Whole-Wheat Naan using one of these variations, please leave a comment below sharing what you modified and how it turned out. We love hearing from you and your ideas inspire us all!

Our entire house smells like fall when we bake this deliciously sweet pumpkin spice granola. Unlike most store-bought granolas that…

Your slow cooker will do all the magic when is comes to this Lamb with Greek Style Gravy! This dish…